Life was hard in rural Pitt County, NC when Richard grew up in the 1960’s.    His mother and father were share croppers on a farm just outside Greenville near the road that was called Red Banks.   Before and after school each day Richard had no choice but to help his family of 10 brothers and sisters bring in the harvest.  Summer was the just the same but more hard work.   Unfortunately, the food he and his family harvested never found its way to their own dining room table.   The food they harvested went to others.

Leaving that farm to enlist in the Army, a new military life, was a new beginning that taught him much.    After his tour of duty ended, he found himself in rural eastern NC once again looking at farming.    This time his motivation was due to the need he saw all around.

He became a pastor, among other ministry positions, and noticed that the people with whom he worked were not living much past age 40.    In his first year as pastor of Conetoe Chapel Missionary Baptist Church, he performed 30 funerals.  People died of preventable diseases.  If only they knew of good nutrition and how to plant food; healthy food.   Thus began Richard Joyner’s new life; returning to a life he once despised.  Now with excitement because of the knowledge of farming that his parents once taught him.   In 2007 The Conetoe Family Life Center in Conetoe, NC was begun by Richard and a bunch of children and teenagers.   This center that has made a tremendous impact on the town of Conetoe as well as the surrounding counties of Pitt, Edgecombe, Martin and Nash counties of eastern NC.

Collards are a mainstay in eastern NC.   I made this quick sketch of one of the community members harvesting collards . 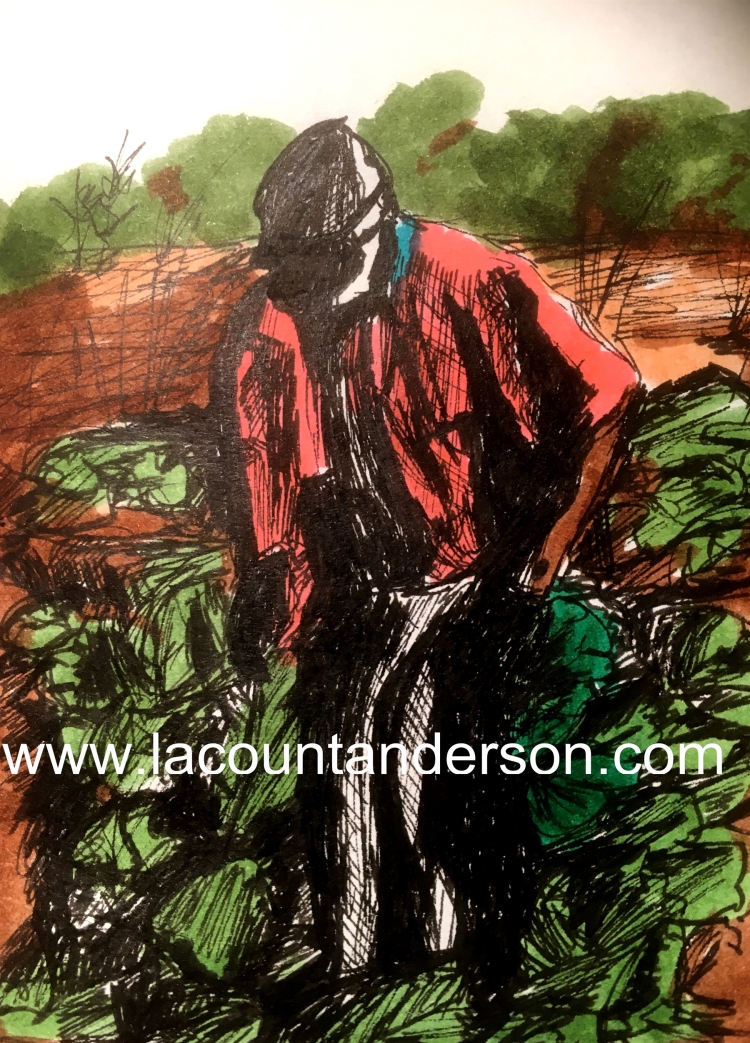 LaCount Anderson is originally from Savannah, Ga. but for the past 45 years has lived in North Carolina. He enjoys graphic arts and his mediums of choice is watercolor and pen and ink. View more posts